In comic book mythology, the Marvel Universe is set squarely in New York.
From Spider-Man’s home base of Queens to the Fantastic Four’s headquarters, the Baxter Building in Midtown to Doctor Strange’s Sanctum Sanctorum in Greenwich Village to the Avengers Mansion located on 890 Fifth Avenue, Marvel’s locations have become an equally iconic part of the comic book mythology as the characters themselves.

Beginning in 2008 with the release of Iron Man, Marvel Studios have spread the locations of the characters, and although Spider-Man and Doctor Strange are still New Yorkers, Thor is set in New Mexico, Ant-Man is set in San Francisco, and Captain America: The Winter Soldier in Washington DC, while other installments, such as The Avengers and The Incredible Hulk, use New York for a battle location for the film’s climax.

In 2014, Marvel’s owners, Disney, made a commitment to shoot their Netflix series on location throughout New York, a move that has resulted in ten separate seasons of their series shot thus far (and continues to do so). Not only does film and video production on location provide verisimilitude, but it also distinctively adds a natural depth that the feature films can’t provide.

Daredevil tells the story of Matthew Murdock, an attorney who was blinded as a young teen and developed a mutation that has enhanced his other senses. Dressed as a devil, his focus is to clean up Hell’s Kitchen; protecting the innocent and punishing the guilty, most particularly Wilson Fisk, “The Kingpin of New York.” As an attorney, we see Murdock practicing with his partner, Foggy Nelson, at the New York State Supreme Court, located at 60 Centre Street.

Much of the first season’s focus is on Fisk and his criminal activities. One of his associates is the mysterious Madame Gao, and the duo frequently meets and discusses their plans together at the Rockefeller Center Roof Gardens, in particular, the 620 Loft and Gallery, which features an impeccably manicured rooftop. Josie’s Bar, the local watering hole where Matt, Foggy, and their assistant Karen Page unwind may be set in Hell’s Kitchen but is an actual dive bar, The Turkey’s Nest, located in Williamsburg at 94 Bedford Park.

Season 2 of Daredevil introduces Frank Castle, The Punisher, a former soldier turned vigilante after he and his family were shot at the Central Park Carousel. In reality, the heartbreaking scene was filmed at the Forest Park Carousel in Queens.

Jessica Jones focuses on a former superhero turned private detective, who was mysteriously given superhuman strength following a car accident that killed her family. She was adopted by the family of the child star, turned recovering radio host Trish Walker. Jessica is suffering from PTSD following encounters with a mind-controlling manipulator.

Throughout the first season, she meets and has a relationship with Luke Cage, an ex-con turned hero with powers of his own.

Jessica works out of her apartment, which doubles as her office at Alias Investigations. Set in Hell’s Kitchen (485 W. 48th Street), the actual building which is used for exteriors, head uptown to 217 W. 101st Street. Meanwhile, Luke Cage spends his time working at what Jessica calls, “the cleanest dive bar in the city”, which is where they meet. Despite being set in Hell’s Kitchen on the show, the actual location is in the East Village at the corner of Avenue B and E 7th Street along Tompkins Square Park, under the name Vazac’s (aka the Horseshoe Bar).

Another character, Jeri Hogarth, a high-end attorney who frequently hires Jessica’s services, runs her law firm Hogarth, Chao & Benowitz from upscale offices high over the city. The series uses another familiar location as her office exterior, the Bank of America Tower, which is the fourth tallest building in the city following the Empire State Building).

Luke Cage quickly found himself in his own series, this one set in Harlem, where the crimefighter installed himself as part of the community.

When the series opens, Luke works at Pop’s Barbershop, located at 181 Malcolm X Boulevard, on the corner of 119th Street on the lower floor of a Harlem townhouse. An equally important location is Genghis Connie’s Chinese restaurant, which doesn’t actually exist in Harlem, but instead, the exterior can be found at 171st Street and Broadway in Washington Heights. The actual restaurant serves Latin Chinese cuisine and is called La Dinastia. In the show, Luke lives in an apartment above the restaurant.

The series’ antagonist, Cornell “Cottonmouth” Stokes, runs Harlem’s Paradise, a nightclub that serves as the epicenter of his illegal activities. The actual exterior of the club is the Music Hall of Williamsburg in Brooklyn. 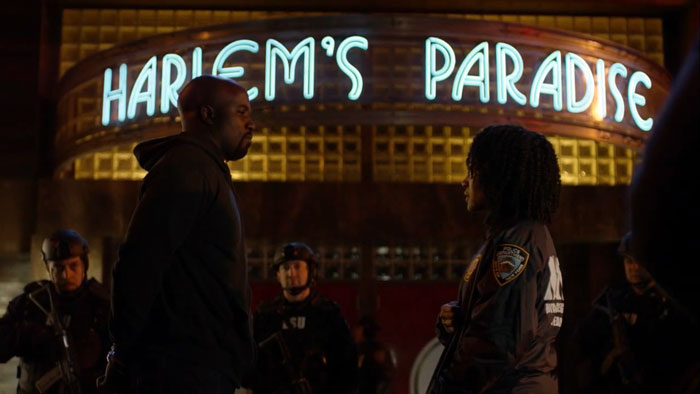 The final character introduced as part of the official Netflix Marvel launch is Iron Fist. Danny Rand, the billionaire heir to the Rand Corporation, returns to New York fifteen years after being presumed dead. Running the company now, are Joy and Ward Meachum, the children of Danny’s father’s business partner, Harold.

As Danny tries to prove his identity, he must regain control of his father’s company and stop the underground mystical forces at work, with the help of martial arts instructor, Colleen Wing, and nurse Claire Temple (who has previously been seen as a supporting character in Daredevil, Jessica Jones and Luke Cage).

The Rand Enterprises Building is an immense office building located at Vanderbilt Avenue and 46th Street (though in reality, it was shot at One Chase Manhattan Plaza at 28 Liberty Street). It’s here where Danny spent much of his childhood. Colleen Wing’s Chikara Dojo is located at 47 Munroe Street in Chinatown near the Manhattan Bridge. The upstairs dojo serves as Colleen’s place of business and Danny’s base of operations. The actual business found at that location is Guang Junche Ng, Inc.

Danny also finds that his childhood home was now the residence of Joy Meachum, located at 19 Gramercy Park, also known as the Stuyvesant Fish Residence. Built in 1845, the property played host to many of New York’s wealthy and cultural elite. The interiors of the location were also utilized which includes a finished rooftop and multi-level chandelier art installation. In August of 2017, Netflix released the limited series, Marvel’s The Defenders, which had Daredevil, Jessica Jones, Luke Cage, and Iron Fist all meet and interact together on a single storyline. Supporting characters from all series appeared, and threads from their own series were picked up and incorporated within. The most prominent location in this series is The Hand’s headquarters located at the Midland Circle building at 635 W. 42nd St. The Hand is a mystical ninja clan that was a prominent subplot that ran through Daredevil and Iron Fist into The Defenders. Let by the mysterious and immortal Alexandra Reid, The Hand’s power and influence grew while hiding deep in the shadows.

The last series, and Netflix’s first legitimate spin-off, The Punisher, brings back the site of his origin in both flashbacks and in the finale, the Central Park Carousel (which was once again filmed at the Forest Park Carousel in Queens as it was in Daredevil). With upcoming seasons of Daredevil, Luke Cage, The Punisher, Jessica Jones, and Iron Fist on the horizon, it will be interesting to see where in the Big Apple Marvel’s heroes will show up next.